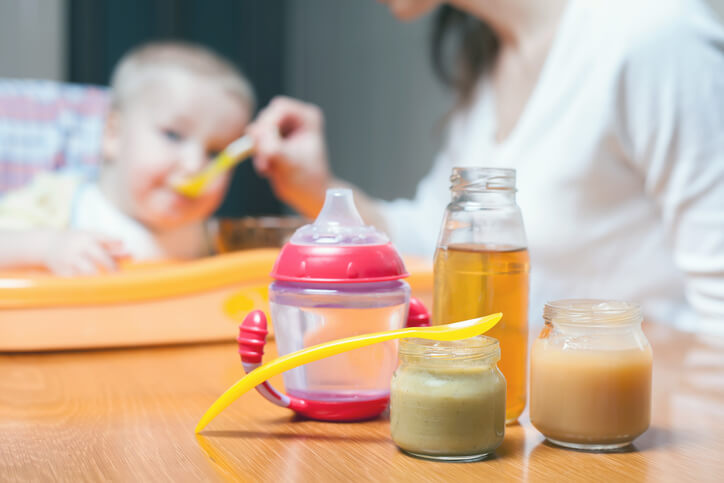 While contributing to SpeechPathologyGraduatePrograms.org, our lead writer Amy, found herself with a referral to a speech-language pathologist for a young son who needed swallowing therapy. Naturally, she had all the questions and concerns any parent would have. Amy immediately saw an opportunity to provide something valuable to parents, SLP grad students, and practitioners: A parent’s first hand perspective on what the experience is like.

Follow Amy in this multi-part series as she documents her experience as it unfolds over the next 12 weeks.

When we found ourselves with a referral for 12 weeks of swallowing therapy, my heart sunk. More therapy? I thought. When does it end?

When Jonas was born he emerged a healthy 7 pounds 5 ounces after a textbook natural birth. No medicine. No complications. The midwives and nurse were thrilled and I was exhausted.

Over the next three days, though, it became increasingly apparent that something was wrong. Jonas nursed constantly. After a 45-minute feed he would fall into an exhausted sleep and then wake crying and ready to feed 30-60 minutes later… and this cycle continued 24/7.

His weight dropped from the 50th percentile to the 5th, and then for weight to height he dropped to the .1 percentile. Needless to say, this would be extremely distressing for any family.

After seeing multiple professionals and starting to supplement with donor milk, Jonas was diagnosed with a tongue tie, torticollis and disorganized suck.

Just When You Think It’s All Under Control…

For the purposes of this account I’ll skip ahead to the end of that season: Jonas’s tongue tie got revised, we did daily suck training, physical therapy for torticollis, cranio-sacral therapy, and chiropractic. We used a finger feeder and I extended my maternity leave because every day, all day, was feeding or therapy appointments. Ultimately, he began to eat better and slowly made his way back to a better growth curve.

“Sometimes babies with Jonas’s issues struggle a bit with solids,” our lactation consultant warned us.

Really? I thought. After so much therapy shouldn’t he actually be ahead of the curve?

I stocked the freezer with pureed peas, carrots, and squash. Jonas thought they were amazing… at first.

Then we tried pureed chicken. He started gagging. Then his eyes got big and he seemed to be choking. Before I even had time to pull him from the high chair vomit poured from his mouth and nose, and then again, and again. After a gasping breath he started crying.

The same thing happened when we tried applesauce. Or anything else more substantial than purees. He even started refusing pureed carrots, which had been a favorite. Meal times often ended in tears.

So today, when we show up to be evaluated by an SLP at the University of Minnesota Medical Center (after waiting to get into our busy pediatrician’s office for a referral, and then waiting even longer to get a new patient slot) I feel a mixture of hope and apprehension at the idea of starting up a new cycle of therapy.

Kyrsten, our therapist, greets us warmly and leads us back to a private room.

After asking about his feeding habits and struggles, she buckles him into a high chair and spreads a large piece of plastic around the perimeter.

“Feeding therapy is messy,” she warns.

She dumps the purees out onto the tray and hands him the spoon.

Jonas looks at her uncertainly and gingerly touches one of the purees with his free hand.

“Like this, Jonas,” she encourages, swirling the food around on his tray and encouraging him to play with it.

Maybe it’s the lack of a nap, or the new environment, or his fear from the last vomiting experience, but he is not interested in the food. At all.

She tries a little silicone Kidsme Feeder, which he also examines with curiosity for a moment and then looks over at me with a definite, OK Mom, I’m done here, expression.

Finally I spoon-feed him a bit and she watches how he eats, but after a few bites he pushes the food away.

“Ok, I think we need to start with fun,” Kyrsten says. “Your job this week is not to make food about nutrition, but about fun.”

The First Assessment Made My Heart Sink

She pulls out a feeding developmental chart.

“This is where Jonas is at right now,” she explains, pointing to the thicker baby food smooth purees segment, in the 7-8 months range.

At more than 10 months old, that puts Jonas 2-3 months behind. Once again, my mother heart drops a bit. How could we be this far behind? Why had I waited for our pediatrician instead of just taking the first available appointment?

Kyrsten doesn’t shame us, though. She doesn’t ask us why or in any way suggest that we should have done better, instead she looks forward.

“This week we’ll work on making food fun, and then next week I’ll spend some more time watching how he eats and experimenting with different things.”

She writes out a plan for us:

I won’t lie…this evening at home when we let Jonas play with his meal, more food ends up on the floor, down his shirt, and in his hair than in his mouth. And cleaning up takes longer than the actual time interacting with food.

But. He eats a little. And there are no tears. That’s progress. So I run a warm washcloth over my child’s body, the table, the chair, and the floor.

One step at a time, right?