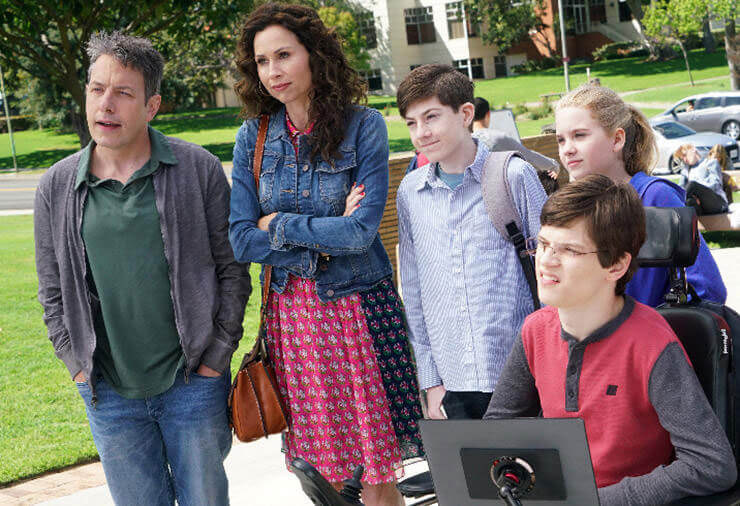 People with communication disorders have long struggled to have their story told.

It’s estimated that about 40 million Americans have communication disorders, but this group has largely gone unrepresented in TV and movies. And while there is still a long way to go, millions of Americans finally got a closer look at what it means to struggle with a communication disorder with the release of the ABC primetime sitcom, “Speechless,” now in its second season.

The show centers around a typical American family of five, and features a character that relies on an augmentative communication system. In the SLP community, we know these devices can serve as a primary link to the world, so you’ll be relieved to learn that the speech disorder – and the ACC system – isn’t just a gimmick the show uses to jerk tears.

You might remember the ‘80s family drama Life Goes On featuring a high school kid with down syndrome in the lead role as Corky. These days, it would be more cringe-worthy for its lack of sensitivity than its corniness. But Speechless avoids these mistakes, stopping short of shamelessly turning the character’s speech disorder into a plot device.

Still, this is likely the first time most viewers have ever seen one of these devices, and it may even be the first time they considered what life is like for those unable to communicate with their own voice.

A Fight Some Parents May Be All Too Familiar With

One of the main characters, JJ, played by Micah Fowler, has cerebral palsy that has left him unable to speak. Fowler has cerebral palsy in real life—another TV rarity where able-bodied actors all too often get the role over the disabled people they portray. In the show, JJ communicates by way of head pointer and communication board, with a performance so convincing that you really get the impression that this must be something Fowler himself has personal experience with.

In the pilot episode, JJ’s mother, Maya, played by Minnie Driver, fights to have her child mainstreamed, petitioning the school to provide an aide who can read his words aloud as he nods his sentences into existence.

Viewers will undoubtedly cheer along with Maya as she fights with nearly everyone in earshot to ensure her son is afforded the same rights as other students. For example, Maya’s first hurdle involves explaining to the school’s administration that the garbage ramp at the back of the school is not an acceptable way for her son to enter and exit the building.

While her tirades often come off a bit over-the-top, at one point goading the principal into a ‘game’ in which she asks him to identify what is trash vs. what isn’t, it still provides viewers with a very honest look at what it’s like for parents trying to advocate for children with special needs.

If It’s Not at Least a Little Funny, Then It’s Not Real Life

But don’t get me wrong. “Speechless” isn’t a depressing ride. In fact, it’s funny—really funny. The show’s creator, Scott Silveri (who grew up with a non-verbal brother with cerebral palsy), has done a great job of portraying a typical American family. It’s not just about JJ; in fact, it’s just as much about the family that supports him. And the story lines are smart, comical, and at times, emotional.

The show also nails it when it comes to showing that JJ is not unlike any other teenager, complete with eye rolls and snarky one-liners.

Instead of just leaning on JJ’s disabilities for a storyline, the show really attempts to tell the story of people’s lives, not just the story of their disability.

The fact that this show has found a primetime audience is exciting for the millions of Americans living with speech-language-hearing disorders, their families, and the SLPs that work alongside them.  It’s a good show by itself, and if it brings a new level of awareness to viewers, that’s just icing on the cake.