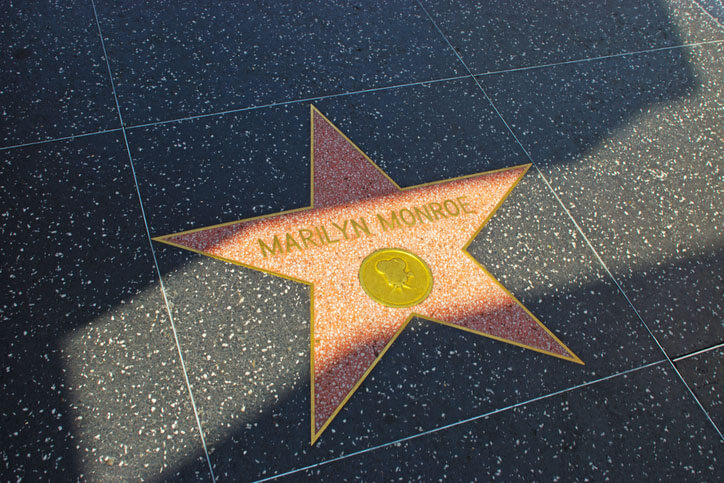 A full 4% of all adults in the U.S. report having problems with vocalization… and nearly 8% percent of children struggle with speech, language and swallowing disorders… but for many, it doesn’t even slow them down.

Plenty of people have overcome or learned to manage their disorders, and some have gone on to achieve the kind of success most of us only dream about. We’re talking movie stars, politicians, sex symbols, heads of state, you name it…. one has even gone on to become perhaps the single most recognized and iconic voice of our time.

For those destined for greatness, you better believe something as small as a pesky speech disorder isn’t going to stand in the way.

We put together a list of our 6 favorite success stories; the ambitious handful of folks we feel deserve some recognition for working through speech and linguistic set-backs to become some the most well-known and admired people of all time.

6 – Marylin Monroe and Her Sexy Stutter

Marylin Monroe needs no introduction thanks to the fame she achieved in her adult life, but as a child growing up in Los Angeles in the ‘30s and ‘40s, life was more difficult for her than you would probably expect. At age seven Norma Jeane (Monroe’s real name) endured some traumatic events, not least of which was the fact that her single mother had a schizophrenic breakdown and had to be committed to a state hospital.

As is all too common among youngsters who have gone through serious childhood trauma, Norma began stuttering and became more and more withdrawn. Making matters worse, she was now officially a ward of the state, entering the foster care system, which shuffled her back and forth between different foster families and an orphanage that she came to know as her childhood home. She continued stuttering even as she entered high school, but through hard work and diligence was eventually able to overcome it enough that most people knew she ever had a problem at all.

Years later, long after she attained national notoriety, in a moment of candor and vulnerability during an interview she mentioned how her stutter would still surface on occasion when she became nervous or flustered.

5 – Jimmy Stewart Had a Wonderful Life Despite His Speech Disorder

Stewart also suffered from a pronounced stutter that punctuated his dialogue on and off the set. But instead of being ashamed, Stewart made it a signature part of his identity. Actor Michael Palin of Monty Python fame explained, “Jimmy Stewart dealt with his stutter openly and elegantly – it became a charming part of his persona.”

Most famous for his leading role in Jurassic Park (1993) as Dr. Grant, and with more recent credits including an appearance in the 2017 reboot Thor: Ragnarok, among many classic films from the 90’s and 2000’s including The Piano, The Hunt for Red October, and Bicentennial Man…

Sam Niell had one hell of a bad stutter as a child. He was so self-conscious about it, that he kept to himself, seldom making eye contact and hoping no one would talk to him for fear he might actually have to speak. He eventually got over the worst of it, although never completely.

The leader who brought his country through World War Two also suffered from a speech impediment.

Many journalists referred to Winston Churchill as having a pronounced stutter, with one going as far as saying, “Mr. Churchill is more often fighting himself than his enemies.”

However the International Churchill Society disputes this, rebutting instead that he had a speech impediment that made pronouncing the letter “s” difficult. According to the society, in 1897 Churchill consulted with a speech specialist who told Churchill he had no pathological problems, and that all he needed to overcome his speech impediment were practice and perseverance.

Later Churchill consulted with a masseuse who told him he had a unique ligament attached to his tongue that prevented him from speaking normally.

In spite of the best advice available at the time, Churchill was able to largely overcome his speech impediment by practicing tongue twisters and rehearsing his diction.

As Vice President during the Obama Administration’s eight-year tenure it may come as a surprise that Biden actually suffered from a speech impediment as a child.

In fact, it was so severe that in a letter to himself he wrote, “Dear Joe, You’re only 12. Your stutter is debilitating. It embarrasses you and the bullies are vicious … you’ll also learn early – and later in your life – that reality has a way of intruding.”

After enduring years of bullying, by the time he was in his 20s Biden decided that he must overcome his speech disorder. His method: recite poetry in front of a mirror for hours on end. His perseverance paid off, and although he may get stuck on a word here or there, no one associates Joe Biden with a stutter.

When he was five years old Jones moved in with his grandparents, a transition away from his mother that traumatized him to the point that he developed a severe stutter. Embarrassed, Jones ceased speaking altogether until a high school teacher helped him overcome his silence and stutter.