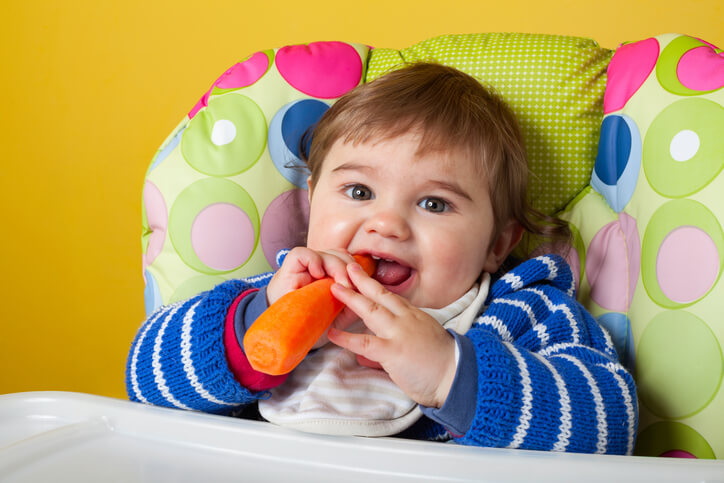 While contributing to SpeechPathologyGraduatePrograms.org, our lead writer Amy, found herself with a referral to a speech-language pathologist for a young son who needed swallowing therapy. Naturally, she had all the questions and concerns any parent would have. Amy immediately saw an opportunity to provide something valuable to parents, SLP grad students, and practitioners: A parent’s first hand perspective on what the experience is like. This is Amy’s second installment in this multi-part series.

Swallowing Therapy, Week 6: My Son’s Weight is Up and He’s Eating!

This season is an exercise in releasing my Type-A, get things done personality. Baby–Led Weaning? Out the door. Plan B of nice, organic purees, focusing on veggies? Nice idea, but…sorry.

Because he developed some feeding aversions after a handful of negative eating experiences (read: my son is done with gagging and vomiting as a mealtime norm) Kyrsten wanted us to focus on playing with food; for a while, actually getting anything into his stomach was no more than a bonus.

So, instead of going into his mouth a good percentage of that precious, organic baby food I blended and stocked our freezer with went everywhere but his mouth. It also meant we spent a lot of time “eating” and then cleaning up.

While I had half a pig, a lamb, and grassfed cow in the freezer just ready to be cut into bite sized pieces, even ground and pureed meat induced gagging and vomiting every time. So we started with mashed beans, which he loved. (My child might turn into a vegan.)

So, while the process of introducing foods isn’t going quite like I planned (fresh, organic, food cut up straight from Mommy’s plate) he is eating consistently, three meals a day.

The Thing I Fear the Most…

I will say, though, that I still find feeding new foods to Jonas at home intimidating.

Have you ever done the Heimlich Maneuver on someone? In real life? I haven’t, and I have no desire to test my life-saving skills on my 11-month old child.

I appreciate that Kyrsten doesn’t minimize my fear. She validates the reality of my concern (and sometimes helps me adjust my perception a bit!) and then we talk about how to approach the issue.

I get that how we as parents feel and act around feeding impacts our child’s emotions about eating. I’m able to be pretty calm when it comes to his trying and/or gagging on fruit, mashed veggies, or beans. Meat, however, continues to induce more disturbing, gag-and-vomit responses; now, instead of swallowing, Jonas pockets the meat in his cheek. I plan to bring this up at our next appointment.

In the meantime I’ll be re-watching a few Heimlich Maneuver videos I saved on YouTube.

Keeping it Fun… While Getting the Mechanics Right

At home we’ve also been finding creative ways to make eating fun. I always tell Jonas what I’m giving him before a new food item, and sometimes I make a special face or sing a silly song for that item. This morning I walked in on my husband making bunny teeth out of asparagus for Jonas to try to grab (which Jonas thought was hilarious).

Honestly, some days Jonas throws pretty much everything I give him on the floor, or pockets it and then spits it all out without swallowing. Other times he tries to shove way more food than he could ever chew into his mouth and I have to help him dislodge some of it. This experience has been very different than feeding my nieces and nephew at this age.

If I’m getting frustrated (because I literally spent more time preparing his food than my own), I take a deep breath or walk into the kitchen to get water and remind myself that keeping a positive mood about food now will pay off in the long run.

Also there’s this thing: he’s a baby. Why wouldn’t he be upset that instead of his beloved milk we give him strange lumps of unusual tastes and textures that may or may not lead to a gag and vomit?

Luckily, Kyrsten has been helping us troubleshoot some of these problem foods, like raw carrots and meat. At times Kyrsten has me do the activities with her and Jonas.

Back when we started hard munchables Jonas couldn’t seem to get through a mealtime without some form of eating related drama. This, apparently, was a mommy-fail, because I misunderstood the point of the exercise.

The goal, Kyrsten explained, is for Jonas to gnaw on the hard stick foods at the back of his mouth, encouraging his tongue’s lateral motion. Actual eating of the carrots and celery wasn’t really expected.

“He’ll learn best by example,” she said during the appointment, handing me a carrot stick. She then handed one to Jonas and took one herself.

Jonas immediately tried to bite it with his teeth, but Kyrsten caught his attention.

Open wide. Carrot to the back corner of the mouth. Pretend to chew. Jonas looked at Kyrsten, then me, and back at Kyrsten. Slowly he adjusted the carrot to the side of his mouth.

It’s a simple thing, but sometimes there is so much information coming during our sessions that it can be hard to keep it all clear. By doing things together, I have a concrete memory to draw on at home. I also appreciate the sense of “being in this together”.

What I’m Learning About Myself

Here’s something I know about myself that I suspect is fairly common: I’m much more likely to comply with a therapy recommendation when I know why I’m supposed to be doing something, and I appreciate Kyrsten’s many explanations.

Early on with Jonas’s suck therapy we were given so many suggestions at once from one therapist that it was physically impossible to carry them all out. Sleep deprived, overwhelmed from birth recovery and attempting to pump enough milk for my little guy, I did the best I could but later found that I had somehow dropped the single most important therapy modality. Once the therapist explained the “why” of this modality, it stuck in my overloaded brain and I was able to adjust my at home therapy for him.

I’m sure that providers see so many patients it’s sometimes hard to remember whether or not they’ve explained the reasoning behind certain actions, but for me these explanations actually enhance my motivation and my ability to accurately carry out the instructions.

Learning to Be Ok with Being “That Family”

One final challenge I haven’t mentioned yet: Jonas can’t have gluten. Or dairy. Or tomatoes. Or corn. Or citric acid. Or a handful of other things.

Yep. We’re that family. The ones that come to school with a list of “can’t eat” items and send kids to birthday parties with their own special little allergen-free cupcake.

The clinic is stocked with food, but not always food Jonas can eat. Kyrsten often has me bring food from home, both specific things she asks for (gluten free puffs, soft fruits and veggies, meat) and also things that have been problem foods during the week.

In spite of the various challenges, we’ve made a lot of progress. Jonas’s weight is back up to the 50th percentile. He’s eating veggies, fruit, grains, and meat or beans at every meal. We’ve mostly moved off of purees and onto ground or well-cut foods. Our biggest issue is the pocketing… even thin slivers of meat or un-mashed beans get shoved into his cheek. One step at a time, right? We still have six appointments on the calendar, so there’s plenty of time for improvement.