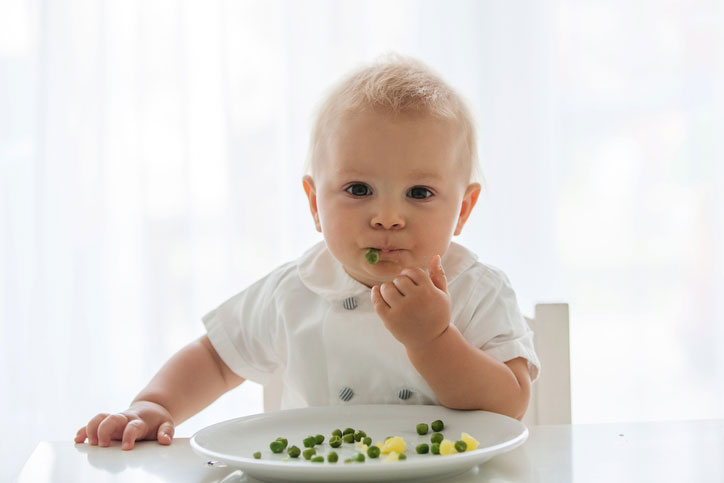 In this series we’re sharing what it’s like to engage in swallowing therapy through the eyes of a parent. While contributing to this website, one of our writers found herself with a referral to swallowing therapy for her son. We asked her to document her experience in hopes that it will benefit both parents and practitioners to see what this process feels like from the parent’s perspective. Following is the third installment in this series.

Swallowing Therapy, Week 12: I’ve Learned the Tricks, Now It’s Up to Me

It feels strange to be coming back to this blog with such a huge gap between installments. I’ve been told enough times since he was born that Jonas’s feeding issues are “more complex” than normal that I suppose it shouldn’t seem strange that we are getting back on the therapy horse again.

The difference is that this time we are leaving the SLP world.

But let’s back up a little.

My last post ended in January, with six appointments on the schedule and a plan to work on Jonas’s issue of pocketing food. He was finally eating well-chopped meats, beans, and veggies. He was still struggling with age-appropriate foods like al-dente cooked veggies or chunks of meat and potatoes.

Then came the nearly two months of illness…first Kyrsten (our therapist), then right as she got better Jonas came down with one illness after another: Strep, tummy bug, fever…we missed two months of appointments, and somewhere in all of the sickness Jonas’s feeding regressed.

When we did come back we spent the first couple of weeks regaining ground: tongue work, chewing on the side, practicing the big chewing motions that we call “dinosaur bites.”

Finally we found ourselves back to the issue of pocketing. At times Jonas would look like a little chipmunk, with cheeks full of food that never actually got swallowed. Kyrsten set up a home plan that included:

To get him ready for his Jiggles alligator, we first modeled playing with it against our hands, our head, and our cheeks. Jonas actually loved putting it at the base of his head on his neck.

Once he felt comfortable with the “toy,” we started gently placing it against his cheek when he would pocket food. At first he gave a startled look and pull away, but eventually he took the cue to un-pocket the food and keep chewing.

Mid-therapy we had a two-week trip to Texas, part work and part pleasure. Shortly after we arrived we made our way to 7A Ranch in Wimberley, the little resort our family holds biannual reunions at.

Our family is massive. From Grandma and Grandpa down there are over 70 of us, and only a few missed this event.

That meant that for four days straight Jonas was eating with a dozen cousins, five in his age-group, who were modeling “normal” eating.

I’ll be honest…I had high hopes for the influence this modeling would have on Jonas, but those expectations were a bit unrealistic. No feeding miracles from this trip!

What it did do was convince him to put a number of foods in his mouth that he had never experienced before. Breakfast tacos, hamburgers, massive bowls of guacamole, corn chips, lettuce, and a variety of raw veggies all got their chance with his palate.

Unfortunately, most of these just got one taste or mouthful and then he wanted the things he was used to. (With the exception of guacamole…he would have eaten nothing but guacamole the whole trip, if I had let him.)

Steps to Eating: An Important Reminder

Kyrsten had already warned me that it can take up to a dozen exposures to a single food item before a toddler finally accepts it, but once the influence of the cousins was gone, he just pushed most new foods away, not even giving them another taste.

“Keep offering them,” Kyrsten encouraged when we came home. “The first goal is just to get him to let the food sit on his tray. Then encourage him to pick it up and play with it.”

She reminded me that kids often need to go through a series of steps to eating new food items. The simplified list of the steps is:

Each of these steps, though, gets broken down even more. For example, “Tolerates food” includes a progression that starts with “being in the same room as the food” and moves through bringing the food closer and closer until it is on the child’s tray.

Luckily for us, Jonas wasn’t so averse that he didn’t want to be in the same room as the foods. He just didn’t want them to touch his tray.

For some foods, like macaroni in spaghetti sauce, he would let it sit on his tray but pretty much ignore it.

During one of our appointments I complained to Kyrsten that we seemed stuck on step 1 with so many of the foods.

“I know it can seem to take a long time,” said Kyrsten, “but things will change. Every time he does something that is moving through the steps, praise him. Celebrate it when he allows broccoli to stay on his tray, or plays with a slice of chicken.”

I decided to experiment with focusing on pasta for a while. I bought a variety of gluten-free macaroni options and found the one that seemed to have the nicest texture.

Since he no longer seemed to be reacting to tomatoes (thank God!), I did a simple marinara sauce with pasta.

“Oooh, Jonas,” I said. “Look what mommy is eating!” I took a big bite with him sitting in his chair next to me. “Yummy! Does Jonas want some?”

I put it on his tray, and instead of just playing with it this time he put it in his mouth. At first he screwed up his face and I thought he was going to spit it out, but then he kept chewing.

I wish every food worked as well, but on this day he grabbed another bite. And another. He only ate a few bites at this meal, but the next day he polished off everything I put in his bowl.

So we’ve been going through this process with each new food. Some foods, like chicken, he now pops in his mouth with only a little hesitation. Others, like beans and rice, he immediately takes off his tray and puts in the all done bowl. (On the good days…on bad days the he pushes it off the tray, onto the floor.)

Chew it Up, Spit it Out

As we progressed we found ourselves hitting a barrier that we couldn’t seem to get past: at least once a day, sometimes at every meal, Jonas would chew some food item until it was well pulverized, and the instead of swallowing it, he would spit it out.

“It seems like we’re a little stuck here,” Kyrsten said after a few weeks of work on this. “Jonas has all of the mechanical skills he needs, and we’ve done some behavioral work, but I think that my colleagues in the Pediatric Behavioral Therapy Center might have some other ways of addressing this that could help Jonas move forward.”

And so we are in the process of transitioning to a new therapist.

To this my response is: Absolutely not.

It wasn’t until Kyrsten started working with Jonas on tongue movement that he finally started chewing food small enough to be swallowed, even though my husband and I had been trying to help him with this on our own. Prior to working with her he regularly choked on his food, and meal times could be somewhat traumatic. If it weren’t for our work in therapy I suspect that Jonas would have an even more limited diet at this point than he does now.

Today he eats various meats, all soft fruit, some veggies if well-cooked, pasta, gluten-free bread items, and smoothies that I pack with mustard greens, collards or kale.

While we still have a little ways to go, I’m so grateful for the time Kyrsten and others at her clinic have spent working with us. I’m not exactly sure where this next round of therapy will take us, but I know that we will only be moving forward thanks to the foundation our tireless SLP has already laid.